Overview
Role: Solo Programmer/3D Artist
Tools Used: Unity3D, Autodesk Maya, Adobe Photoshop
Awards: 3rd Place Fraternity Division, Carnegie Mellon Spring Carnival 2018
Intent
Considering the volume of people that tend to go through the booths during Carnival in general, I wanted to create a game this year that would not only allow more people to experience the game at once, but also allow them to share the experience together. This is what led me to decide to make a multiplayer game, and I also wanted to keep the arcade-y spirit that booth games generally tend to have as well. A combination of Time Crisis and Link's Crossbow Training is what led me to land on this style of idea.
My favorite aspect of Twilight Princess is the dynamic between Hyrule and the Twilight Realm, so I wanted to make a game that would take advantage of both worlds. Like the actual game, you begin in the forest area, the Faron Woods. Once the level is cleared, the players are transported through a Twilight Portal into the Twilight Realm. Eventually the players will progress to fight the Twilight Usurper King, Zant, after which in classic Legend of Zelda fashion, players have the final battle against The Great King of Evil himself, Ganondorf.
Process
Camera Movement
The game follows the same general pattern of Time Crisis where players travel through the level and stop at specific areas where enemies begin to appear. The players must clear the area of all enemies before they are brought to the next area. To achieve this level scrolling effect, I set waypoints throughout the level that would denote the position and rotation of the camera for areas where enemies would appear, and wrote a rails script that calculated a bezier curve between the points for the camera to travel along.

Enemy Models/Animation
All of the enemies featured in the game are the direct models from Legend of Zelda: Twilight Princess. While most of the character models came pre-textured, the the models did not come rigged or animated. For the non-humanoid characters, I manually rigged and animated the characters myself. Due to time constraints, I only used linear skin binding with minor skin weight painting.

The final Skulltula animation. Each leg is an individual IK rig.

For the humanoid meshes, I used Adobe Mixamo process for automatic rigging and animating. Specifically for Ganondorf, I downloaded an FBX of his Mixamo-generated rig, as well as the skeleton data for several different animations to be featured through his battle (walking, spell casting, dying, etc) and connected through an Animation Controller.

An initial test for Ganondorf's animation on Mixamo

Aesthetics and Visual Effects
I wanted the aesthetic and tone of this game to match Twilight Princess as closely as possible, especially since I did not have access to most environment models from the game. I used references images of Twilight Princess to inspire the layout and color scheme of the different areas. This was done through a combination of directional lights, ambient lighting from skyboxes, and color correction through Unity's Post-Processing Stack. 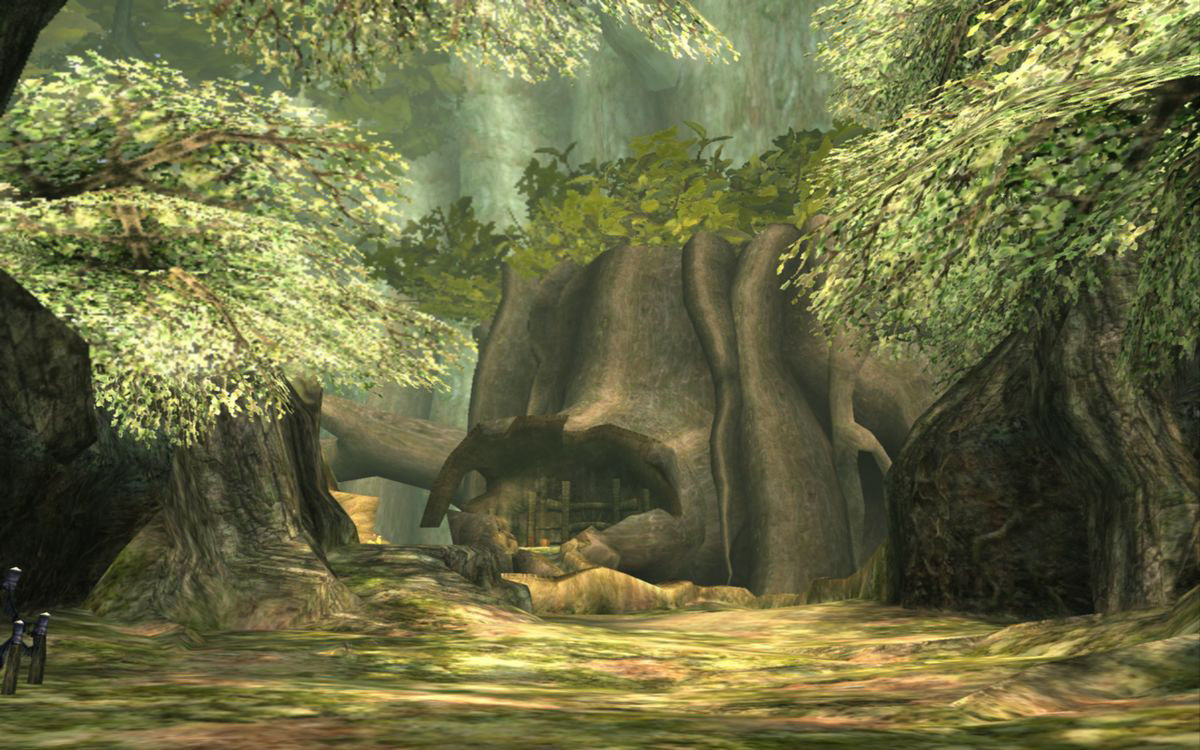 My recreation of the portal to the Twilight realm (left) vs. the portal from the actual game (right)
The effect is comprised of several layers of particle systems. The outside is a singular sprite of the outer part of the portal, emitted one particle at a time. The color fades from white to black and back to white over its lifetime to give the effect of color pulsation for the neon lines. The black area within the center of the portal is an animated smoke sprite sheet to give a subtle effect of swirling/movement rather than being still. The outer ring of the center is the default particle, colored neon blue-green and set to emit from a circle. The inner circles are a white circle sprite made in Photoshop that I have set to grow over time and also colored neon green. Lastly, the black twilight squares are Unity's default blank sprite particle colored black and emitting from the center circle.
The other big effect in the game are Ganondorf's and Midna's projectiles. The shadow ball (shown below) is what Ganondorf throws at the players in the final fight, and Midna's (the second player's character) shoots a similar looking ball of twilight magic.

This effect is achieved in a similar way to the inside of the Twilight portal, where the outer ring is the same as the inner rings from the portal, and the inside is filled with a dynamic smoke particle effect. Ganondorf's ball has an additional particle system where the particles stretch into the center of the ball from the outer rim (these particles simply have a negative velocity to send them inside the center of the spawn radius). These projectiles are rendered with billboard alignment angled to the camera's view, to give the illusion that they are three-dimensional objects, and also have three-dimensional sphere colliders for collision purposes.
Product
Twilight Crisis was featured in Sigma Phi Epsilon's booth for the entirety of Spring Carnival 2018, which ran from Thursday, April 19th through Sunday, April 22nd. The game was featured in the Portrait Hall room on the second floor of the booth. 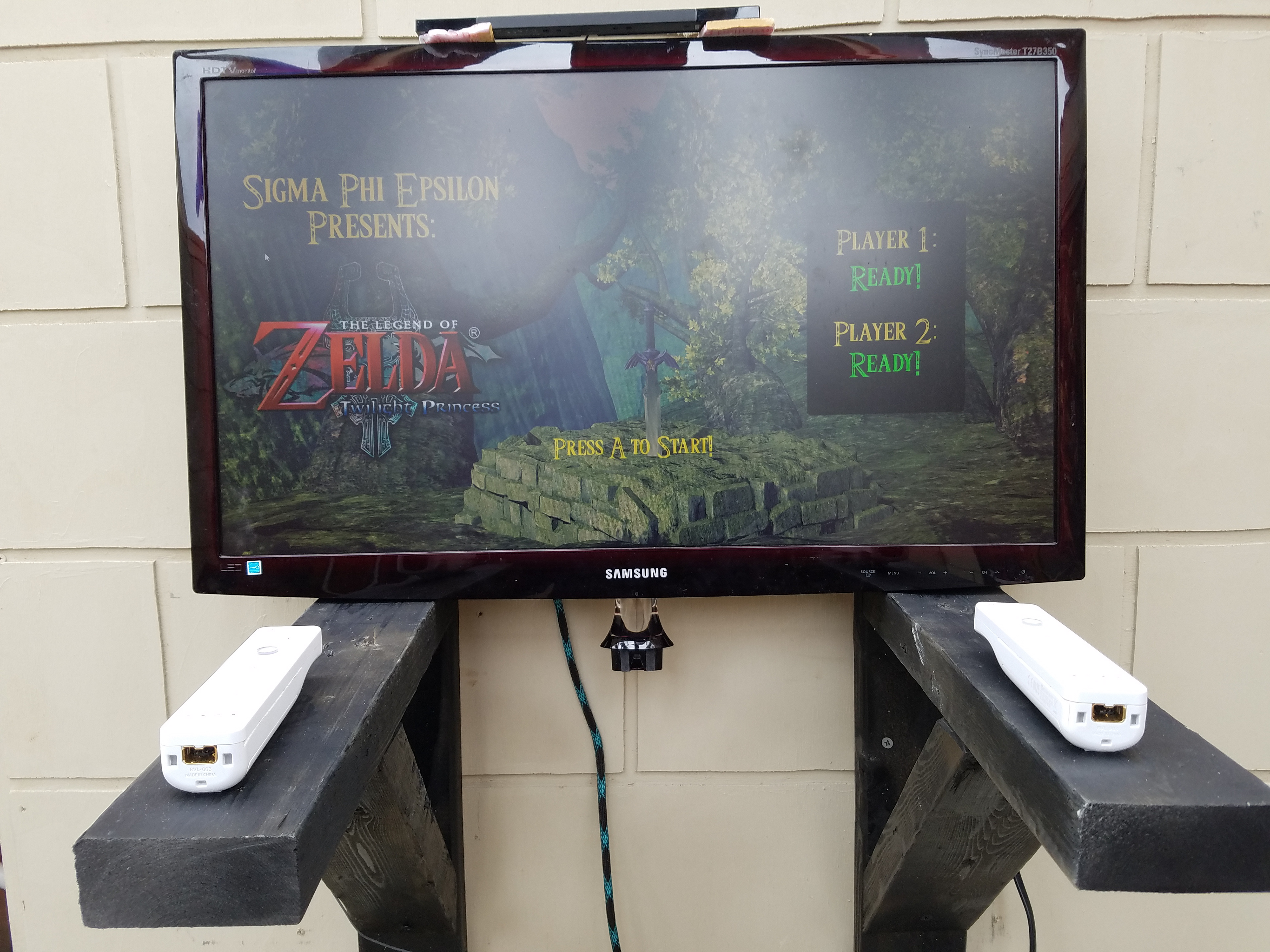 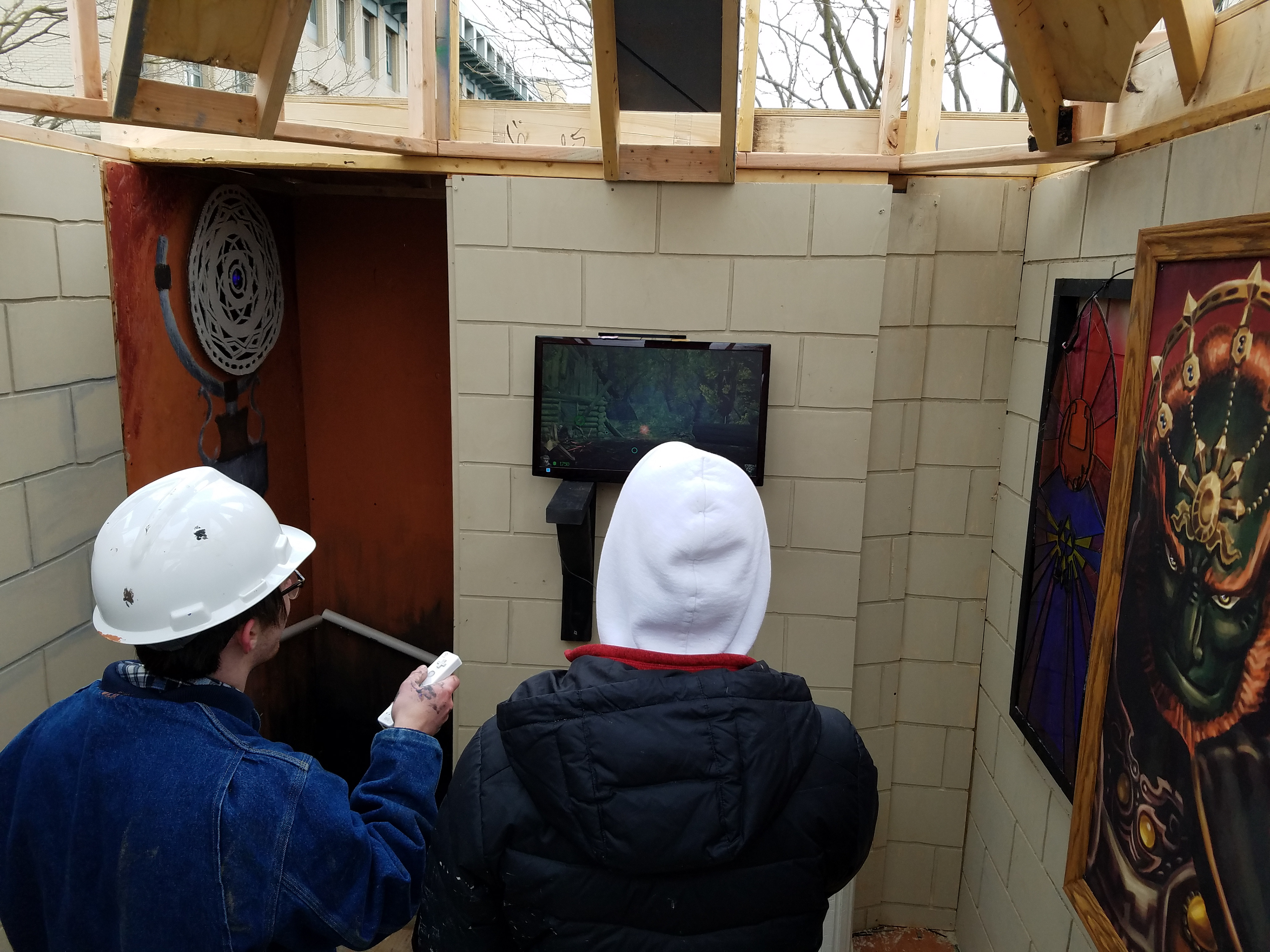 Close up shot of the game setup, and a wide view of the game in the Portrait Hall with people playing
↑Back to Top