A gameplay video of SigEp Wars: Escape from Jakku

Overview
Role: Game Programmer
Tools Used: Unity3D, Autodesk Maya
Collaborators: David Murray
Awards: 1st Place Fraternity Division, Carnegie Mellon Spring Carnival 2017
Intent
The main goal for the game, which was also the same mentality for our choice of Star Wars theme for booth, was to evoke people's nostalgia and childhood wonder of being immersed in the Star Wars universe. Seeing how the Millennium Falcon is the most iconic starship from the Star Wars series, and the exact scene the game was based on was featured in the trailer for The Force Awakens, I wanted to have a game that allowed people to finally live out their dreams of flying the ship that made the Kessel Run in less than 12 parsecs.
While Escape from Jakku is technically considered a game, there is no explicit objective other than to shoot down TIE Fighters that follow you as you fly. Since the game would be played by children and people with limited experience in virtual reality, there is no "death" or "lose" scenario and all players will successfully reach the end sequence regardless of how many TIE Fighters they actually destroy.
Process
The game was created in the Unity3D engine and the built-in OpenVR packages, and was run on the HTC Vive mounted to a plane steering mechanism. The models were all downloaded online on various websites such as Turbosquid and TF3DM, and the environment was created using the built-in Unity terrain editor tools. The player object, or the vive camera object, was positioned in the Millennium Falcon turret seat model. The turret seat moved around the environment on a rail system, consisting of 14 different empty GameObjects that represented target points for the turret seat to reach across the map. An overall game manager script kept track of which waypoints the player had visited to play sound clips from the movie at specific points and trigger the end sequence once the player had reached the end of the track.

To shoot at the TIE Fighters that are chasing them, players aim and fire the Millennium Falcon's turret guns using the Vive controllers mounted in front of the physical turret chair that the players sit in for the duration of the game. The controls are the same as airplane handle controls, where tilting the controllers towards yourself aims the crosshair up and pushing them down and away from yourself moves the crosshair down (and aiming left and right is intuitive), and the trigger buttons on the back of each controller fires that respective cannon.
The AI for the two TIE Fighters was relatively simple. They chase the player by following two empty GameObjects floating several units away from the player, so that even if the Fighters reach their targets they will still be within a shootable range by the player. The speed of the Fighters increases with the distance they are from the player, so that they can catch up quickly from their respawn points and keep up the sense of urgency to the game. The TIE Fighters also periodically shoot lasers at the player, which will cause a damage sound effect to play if the player is hit.

Process
Escape from Jakku was featured in Sigma Phi Epsilon's booth for the entirety of Carnival 2017, which ran from Thursday, April 20th through Sunday, April 23rd. Fellow fraternity brother David Murray constructed the chair and handle mounts for the Vive controllers. As people walked through the booth, they could step into the Turret Room and play the game, while others going through the booth could watch the gameplay on a monitor a few feet down the hallway. 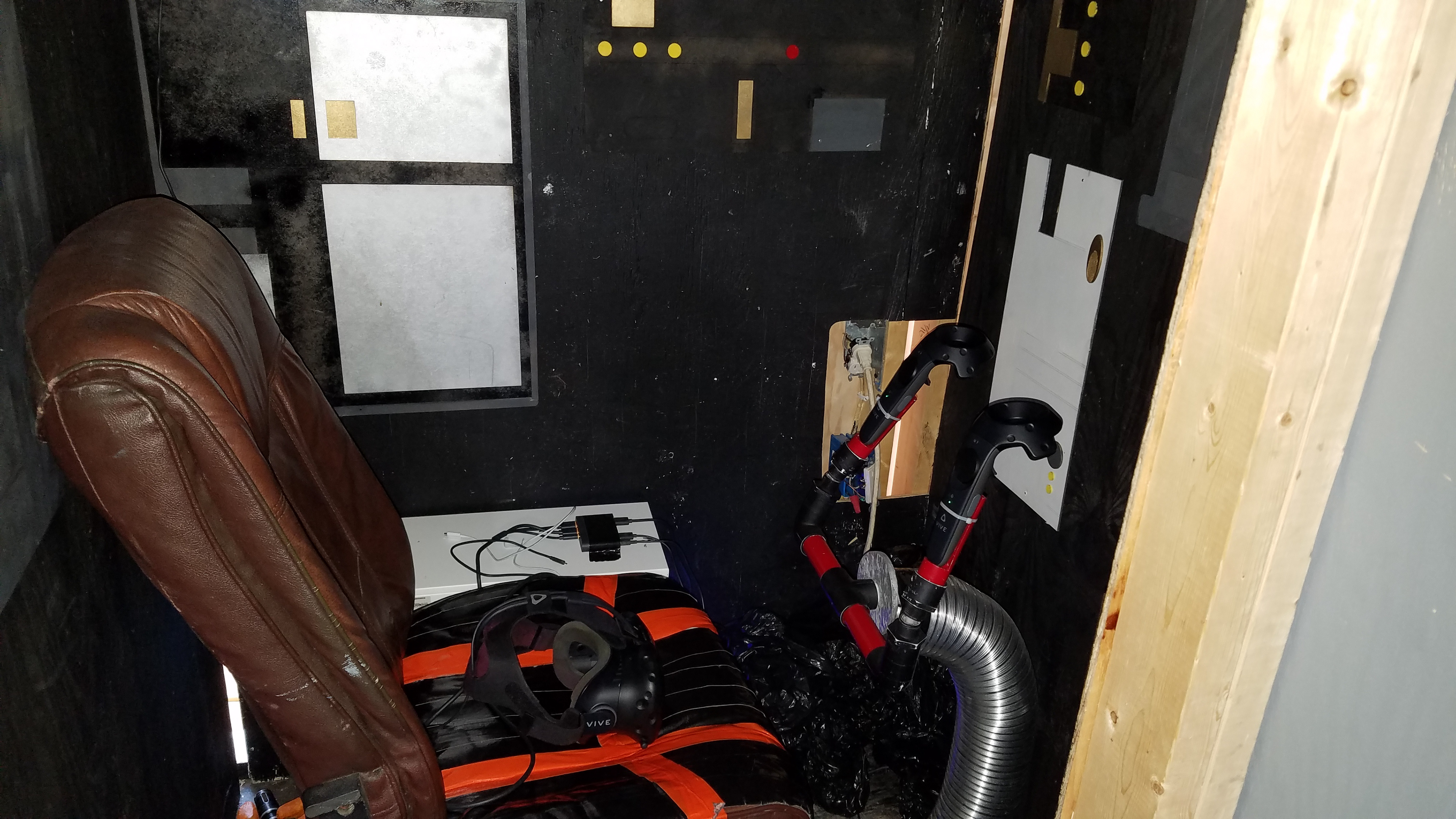 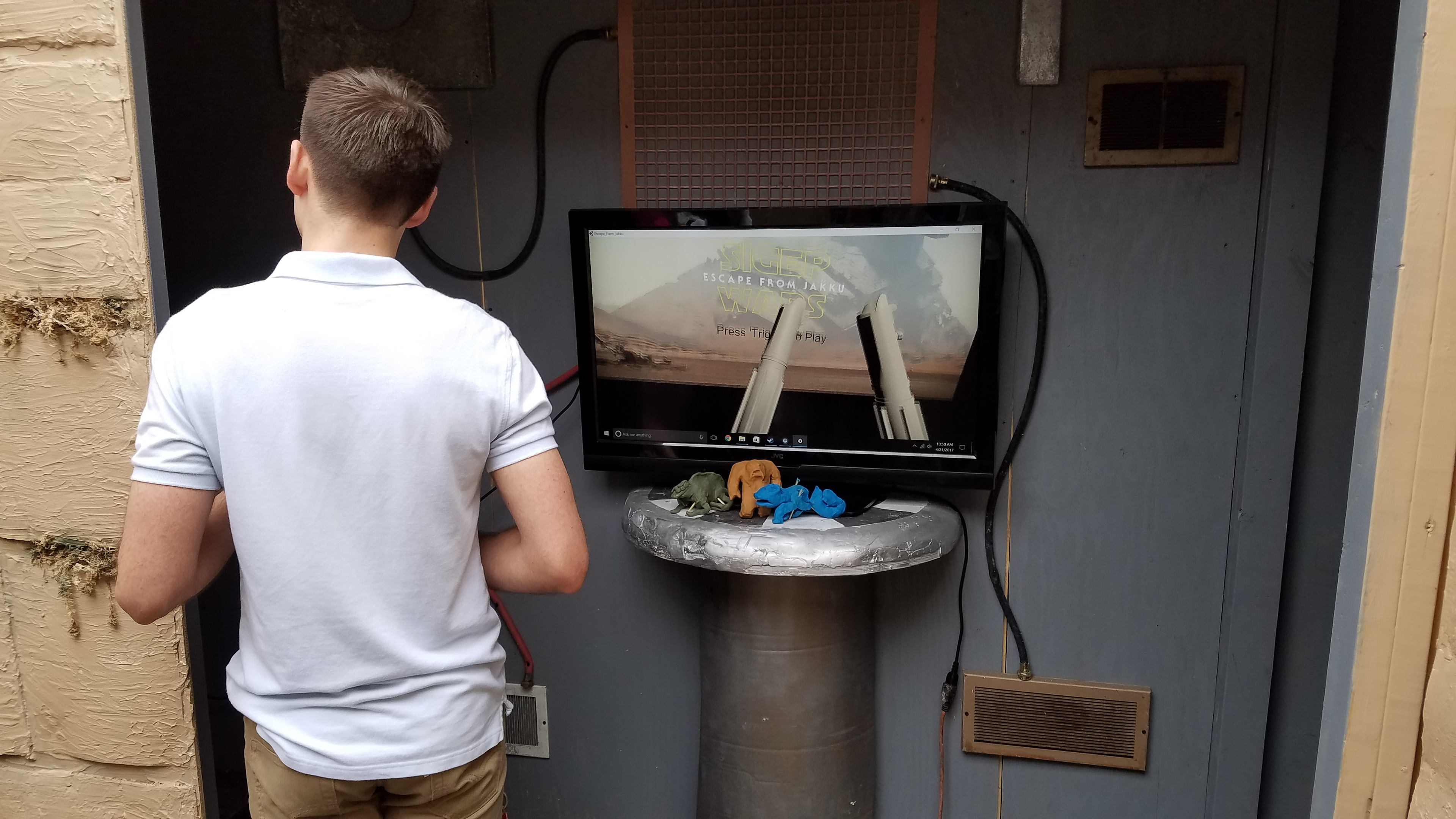